OK,  Hopefully from the last couple of years you know that I keep this blog updated often.  The first few weeks of 2013 have been enormously busy.  I will hopefully have work to show sooner rather than later but everything I am working on is under NDA and very Hush hush.

The life of a freelancer gets busy quick as since the last week in December I started working with Trendy Entertainment, Disney Interactive, Shadow Machine Animations, Bento Box, and one yet announced slug for Slugterra.  That along with the holidays and such it's been overload of awesome.  I'll be getting back to regularly scheduled blog posts with new art soon.  Still hard at work on the graphic novel with plans for a new website redesign.  Time to get serious with all my free time.....  I plan on doing tutorials and free comics (one a week storyline etc)  Not sure which is first.  I'll post some Fil n Mantis tomorrow from the graphic novel to prove I'm still hard at work.

I'll leave you with this: 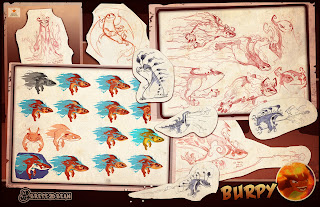 Burpy.  The main slug from Slugterra.  We went back and forth many many times and although he looks very different in the show, we had a much more adult Burpy for awhile.  Some early explorations and the such. (and yes, Dave and Greg did so good on how they presented their concepts for the show I used the idea too)
Thanks again for stopping by and supporting me on the journey.